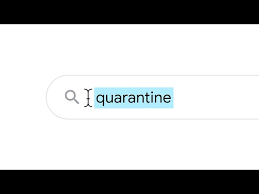 Google started advertising a video, “Get back to what you love” is just one minute long but it delivers a powerful message. It was released last week over the weekend in an effort to persuade people to use the latest coronavirus vaccines.

Getting people to take the vaccine all over the world is a daunting challenge, and Google has begun its public awareness campaigns in the United States, a nation with a significant number of residents who do not believe in the effectiveness of vaccines. With this short ad, Google has taken a personal approach rather than relying on hard facts and numbers.

The one-minute video starts with the company’s iconic search homepage, which displays different search words in the bar before being edited. The phrases “quarantine” and “social distancing” are removed using the backspace key in one animation, while the words “school closings” and “restrictions de voyage” are selected with the cursor and then deleted in another.

After that, the video shows Google Calendar entries with words we’ve all grown accustomed to over the last year after spending the majority of our days indoors.

The video picks up speed as it shows different Google Maps locations, such as a restaurant, a theatre, and others, reopening after being “temporarily closed” – these are shown in a variety of languages. In the final section, the company packs a punch by displaying a view of the search bar with an animation of the words “covid vaccine near me” being scanned.

The video has received over 500 comments, the majority of which praise it, stating that it was strong, made them cry, or that they would share it with others.